Climate is changing, it is a fact. The IPCC, the World Bank and the scientific community tell us that it is very likely that these changes are related to the great increase in anthropogenic emissions of Greenhouse Gases (GHG) and that temperature may reach in average by the end of the century, 4ºC more than in preindustrial levels.

From the last decades, the world is assisting to different phenomena worldwide that attest this truth and show us that the speed of change is increasing day by day. Global warming is not felt only with the increasing of temperatures, but also with all the different dynamics that these differences put into the climate, and, therefore, into our lives as part of this global system.

Global warming effects are not linear or simple, they require a complex perspective on inter-relational causes and consequences in the whole environment and in the habitats of all species in the world. And this speed of change requires a speed of action, both on mitigating the potential warming effects of our human behavior (reducing our emissions and targeting a zero carbon world) but also, and urgently, adapting for the current changes – some of them possibly irreversible at this point.

Climate is changing and the average world temperature is warming. When this happens (and it happened already in other interglaciar eras but not as fast as today) there are effects on temperature, land, winds and currents, precipitation and sea. The whole world reacts to these changes and the ecosystems are transformed. With higher temperatures, the sea level rises mainly as a consequence of sea warming (thermal expansion) and ice sheet melting in the poles; precipitation increases in some regions and decreases in other regions – the wet regions become wetter, dry regions become drier – and the number and intensity of extreme precipitation events increase while drought also becomes more frequent; because of a more balanced temperature in the whole planet, wind behavior changes and the intensity of extreme events like typhoons, tornados and hurricanes increase; with a global average higher temperature, heat waves become more frequent and intense, and all these events have high impacts locally and globally.

Some consequences of climate change are already irreversible for the next decades or even centuries, and this is a fact that must be taken into great attention – it is time to plan for resilience and get adapted to our new reality.

Why cities are important?

We live in an urban world. For the first time in our history, there are more people living in cities than in the country side, and this number is projected to increase in the future. Many cities in the world are located in coastal areas, and some of the greater megacities are in the developing world.

Cities are particularly vulnerable to climate change in the way that they concentrate great amount of people – so in case of a hazard, the impacts are in great scale – and that they lack planning strategies to face the current changes in climate.

Sea level rise, in particular, is a phenomena that is already happening and that will keep on evolving in the future. Sea level rised around 20cm since preindustrial times, and according to a semi-empirical model, in a world 4º warmer, sea level may rise up to 1m above 1980-1999. However, this projections are not certain - when historical sea levels are analyzed in past interglaciar eras, it is observed that on a world 4º warmer, sea level reached about 10 mts above current levels.

No matter what, in both scenarios, it is clear that a great number of cities are in risk today.

Besides sea level rise, within a warmer world, we find both wetter and drier scenarios. In both cases, cities have an important role to take and planners need to act accordingly to their potential to improve urban resilience by getting adapted and helping mitigating future warmer scenarios. Together with adapting for potential punctual climate hazards, cities shall be aware of the importance of planning incorporating demands of food production, social impacts of flooding and droughts that will help increasing migration phenomena, and understand the current reality as a time of opportunity to review and re-question the planning paradigms that exist today.

Given the competition for land that may be used for other human activities (for example, urbanization and biofuel production), which can be expected to increase as climate change places pressure on scarce resources, it is likely that the main increase in production will have to be managed by an intensification of agriculture on the same—or possibly even reduced—amount of land. (World Bank 2013: 44)

What can we do?

There is a current trend of planning perspectives focused on sustainable planning and on the understanding of cities as important places for action towards climate change. The action needs to be focused on all different urban issues, from land use planning to sustainable transportation strategies, from improvement of informal settlements to re-urbanization of old areas, from production of knowledge to information and communication, in a strong interdisciplinary and complex perspective on the needs and opportunities, based on participatory, comprehensive and strategic planning methodologies.

It is important to understand the high potential of new conceptualizations of linking back concepts from rural and urban areas, focusing on urban permaculture. Concepts like co-housing, car-sharing, urban agriculture, increase of permeable areas, protection of prone risk areas, focusing on non motorized transportation, together with planning for disaster risk management – provision of health support in safe areas, creation of public infrastructure resilient to hazards (to ensure provision of basic needs, like water and transportation of people), early warning systems and management of community re-location, etc.- are extremely valuable in the sense that have potential impacts on both adaptation and mitigation purposes. By increasing permeable areas in the city, and greening surfaces may, for example, it is possible to help in absorbing rain water, preventing from flooding, increasing the absorption of CO2 emissions, and in case of green roofing, to allow the storage and provision of rain water for human use – decreasing for one side the consumption of water from other sources, and in case of a hazard, having provision of water for whole communities.

Planners need also to work closer to energy experts, in order to find ways of decreasing energy consumption and to find potential in urban and building planning to be part of the energy cycle instead of being simple consumers. For example, in the island of Samsø, in Denmark, energy and urban planning act together towards a more efficient energy use (Samsø

is the Earth's only self sufficient energy island), focusing on renewable energy sources but also on a community support on home energy use, business and transportation strategies and behavior. In order to support planners choices towards climate planning, increase information and empower planners for strategic views on planning for climate change and energy efficiency, there are plenty of publications on the theme, from high institutions. There are also many different networks where planners can participate, collaborate and exchange information with peers all over the globe on climate issues and practices.

This year, the UN-HABITAT published the Toolkit and the full Guide for planners “Planning for Climate Change. A strategic, values-based approach for Urban Planners”, available on the website for free download; the European Union published in 2013 a report on guidelines for “Developing and Implementing a Sustainable Urban Mobility Plan”; the UN-HABITAT programme Cities and Climate Change Initiative focuses on preparedness and mitigation activities to be implemented in the developing world; the UNISDR campaign “My city´s getting ready – Making cities resilient” focused on urban governance and reduction of urban risk related to hazards, through the implementation of the Hyogo Framework for Action 2005-2015; the C40 cities – Climate Leadership Group is a great platform and build on a strong network between different world cities, building partnerships to tackle climate change . 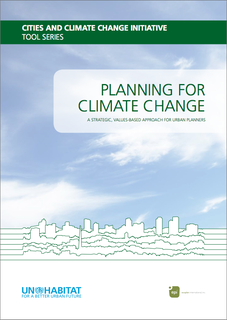 The EU, together with the Swedish created the SUDPLAN - Sustainable Urban Development Planner for Climate Change Adaptation – an online tool that links environmental models, spatial data and climatic databases in order to allow for prediction and training towards a climatic oriented long-term planning. The project allows planners to have access to information on climate and potential hazards risks and to work upon this information.

Many other initiatives are happening everywhere, opening up and supporting the global discussion and the local practice, allowing planners to go further and deeper into these issues and questionings.

The information is public, the climate reality is well published, the consequences are predicted to some extent. It´s up to us, planners, to follow up with the global movement and act for more resilient cities today and for the future. And it is up to us to understand that the paradigm shift – of the world climate, and of the urban world – is an opportunity for better practices and for more critical perspectives on what cities can give to us.